If you’d like to see the Jets training camp roster here are the 55 players attending camp. 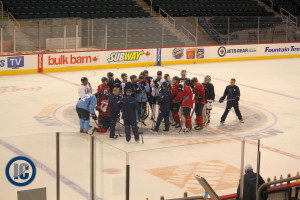 It all starts (for fans) tomorrow as the team will hit the ice at the IcePlex.

The Winnipeg Jets today announced their roster for their 2015 Training Camp prior to the 2015-16 NHL season. Training Camp opens on Friday, Sept. 18 at MTS Iceplex.

Fifty-five players have been invited to camp including 30 forwards, 19 defencemen and six goaltenders.

The Jets will conduct Training Camp at MTS Centre and MTS Iceplex from Friday, September 18 to Saturday, October 3. Players will be available to the media at the completion of their entire training day, which consists of their particular group’s on-ice session followed by an off-ice workout. Head Coach Paul Maurice will be available to the media approximately 20 minutes following the final practice of the day.

Winnipeg Jets fans are also reminded of the second annual Fan Fest on Saturday, Sept. 19from 9 am to 2 pm at MTS Iceplex.

For a downloadable PDF of the training camp roster click here.