Looking ahead at the promotional giveaways and events for the upcoming Jets season. 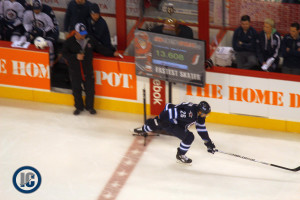 Another season, another round of Jets promotional offers and events.

The Winnipeg Jets, in conjunction with the National Hockey League, are proud to support Hockey Fights Cancer when they host the Philadelphia Flyers on Saturday, November 7th. Once again, the team will skate out in pre-game warmup wearing special edition jerseys which will be auctioned off in support of CancerCare Manitoba Foundation following the game. The Jets will also commit to raising awareness about mental illness on Tuesday, February 23rd when they host the Dallas Stars promoting Hockey Talks, along with the Winnipeg Jets True North Foundation’s own program, Project 11.

The Winnipeg Jets look forward to continuing a tradition of honouring the Canadian Armed Forces when they host the Edmonton Oilers on Sunday, March 6th. The Jets will wear military themed jerseys during pre-game warmup which will be auctioned off with proceeds going to Canadian Armed Forces charities. Canadian Armed Forces personnel attending the game will be encouraged to be in uniform in hopes they will take part in another post-game photo opportunity on ice at MTS Centre.

The Jets will feature six exciting giveaways during the 2015-16 regular season including a new bobblehead at the final game of the regular season on April 3rd vs. Minnesota. Jets fans will be able to add Bryan Little to their bobblehead collection which already includes Andrew Ladd, Ondrej Pavelec, Dustin Byfuglien and Blake Wheeler. The first giveaway of the season will happen on opening night when the Jets host the Calgary Flames on Friday, October 16th. That night, fans will receive a glow wand and fridge magnet schedule. The Jets will have a poster giveaway this season on January 26th that will recognize the Winnipeg Jets’ representative at this season’s NHL All-Star game.

The Winnipeg Jets are excited to host a pair of fan events this season with the second-ever FanFest at MTS Iceplex followed by the annual Skills Competition. FanFest will help kick off the season for Jets’ fans on Saturday, September 19th as they will have the opportunity to take in training camp at MTS Iceplex while enjoying interactive activities in the parking lot. The Winnipeg Jets Skills Competition will take place at MTS Centre on Thursday, December 3rd as Jets’ teammates put their skills to the test against one another.