The Jets recall Niku from the AHL. 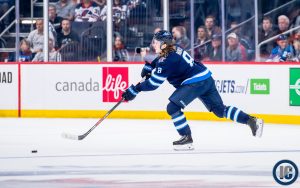 After having a tough training camp with the Jets from a conditioning perspective (car accident, getting into just one pre-season game and due to a groin injury having just two days of practice with the team) Sami Niku found himself with the Manitoba Moose to kick off the 2019-20 season.

The talented Finnish defenceman didn’t look like conditioning was an issue in the two games he played for the Moose this past weekend in Texas which the team split and in which he picked up a pair of assists.

The 2017-18 Eddie Shore Award winner as the AHL’s outstanding defenceman will certainly be a boost to the Jets depleted blueline.

Jets coach Paul Maurice in his scrum following Jets practice today in Pittsburgh indicated that Dmitry Kulikov had returned home to deal with a personal matter (of a positive nature) and that the team will recall Sami Niku according to Ted Wyman of the Winnipeg Sun.