Jets recall their 2017 1st rounder from the Moose. 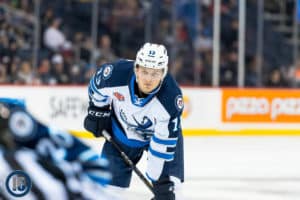 Thursday morning there was a report out of Finland that the KHL contract of Jets 2017 1st rounder Kristian Vesalainen had been purchased by his hometown team Jokerit.  Of course this led to all sorts of speculation that the prospect would be heading back to Europe for the remainder of the season.  In the eight games he has played since he was sent down to the AHL to play with the Manitoba Moose he has three goals and five assists.  He has looked way more comfortable playing big minutes as well as getting time on the power play with the farm club.

Today just before puck drop here in Winnipeg as the Jets were getting ready to face the visiting Buffalo Sabres the team announced that they had recalled Kristian Vesalainen to the big club.

Of course this led to further speculation as to his future status.  Will he stay or will he go?

Sara Orlesky of TSN had this to say:

Vesalainen can still choose to go back and play in Europe this season if he is reassigned again by the Winnipeg Jets.

Here is what Ken Wiebe of the Winnipeg Sun added:

To try and keep this as simple as possible(though it is complex) there is no hard deadline for #NHLJets F Kristian Vesalainen to decide to return to Europe this season.If he’s not in the NHL and chooses to continue his development there at some point,that’s his choice (this year)