Schilling gets the call. 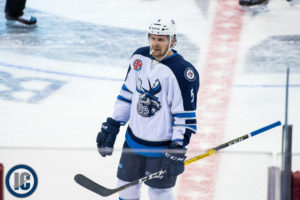 With Tucker Poolman out for the foreseeable future as a result of an injury he sustained this past Friday night against the Iowa Wild and with the Jets apparently needing a D man the team announced that they have recalled veteran Cameron Schilling.  The eight year pro has played six NHL games in his career with the Washington Capitals, the last of which was played during the 2014-15 season.  He is entering his second season with the Manitoba Moose.  He has played in 15 games for Manitoba and has 0 goals and six assists.

The team also announced that they placed Andrew Copp on injured reserve.