Note:  The Jets were trying to look ahead on Wednesday at practice as they attempted to move past another blown 3rd period lead on Tuesday as they set their sights on the Chicago Blackhawks whom they play tonight at Bell MTS Place to conclude a two game series at home.  While Head Coach Paul Maurice indicated that he expects Dustin Byfuglien and Joe Morrow to be players tonight the team recalled Cameron Schilling from the Moose and placed Andrew Copp on IR.  Check out the Winnipeg Jets pre-game report.

Note II:  The Moose kicked off their California road trip with an impressive 5-1 win over the Gulls in San Diego.  Impressive because they did it with a number of key players missing from the lineup including Cam Schilling/Sami Niku/Mason Appleton (recalled to the Jets) as well as Tucker Poolman/Luke Green (injury).  Eric Comrie was fantastic making 31 saves and only losing the shutout bid with 18 seconds left in the 3rd while Logan Shaw burnt his former team from earlier in this season scoring his first ever AHL hat trick (a natural one to boot).  What makes Shaw’s goals all the more interesting is that all three were power play goals (Manitoba went 3/4) and the entire tean hadn’t scored on the PP in any road game this season (9 in total).  The Moose are scheduled to practice today in San Diego as they get ready for the re-match tomorrow night.

The Athletic Winnipeg: Finding Patrik Laine: The incredible origin story of the Jets eccentric star. (Paywall). Murat went deep on this look at the Jets sniper.

Winnipeg Sun:  Five Keys to the Jets and Hawks game.  The big matchup is Patrick Kane vs. the Jets. The five keys to the game are: 1) Expect a surly bunch of Hawks. 2) Special teams. 3) Out of the gate. 4) No softies. 5) Time to finish.

Winnipeg Sun:  Hellebuyck’s 2016-17-level numbers a big reason for Jets’ inconsistency.  Don’t think it can all be laid at the feet of the netminder but he hasn’t looked as solid as he did last season.

Winnipeg Sun:  Byfuglien hit shows NHL erring on the side of winning.  Paul looks at whether the right decision was made allowing 33 back into the game.

Winnipeg Free Press:  Jets looking for answers after blowing third-period leads.  (Paywall).  Considering how infrequently it occurred last season the numbers of times it has already happened this season is cause for concern.

Winnipeg Free Press:  Missed practice a precaution, Byfuglien likely playing today.  (Paywall).  The recall of Schilling is curious but perhaps it is no more than insurance considering the Moose are in California.

Elite Prospects: On Patrik Laine’s unique goal scoring ability.  Dmitry looks at what it is the Finnish sniper is doing well. 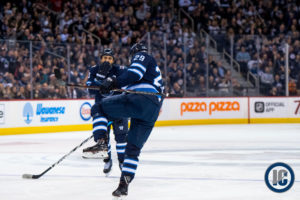 Sportsnet: Jets Prospect Report (Finding bargains outside of Round 1).  Rory Boylen provides an update on five of the most interesting Jets draft picks from the 2018 NHL Draft.

Sportsnet:  Jets’ game plan to set up Patrik Laine’s shot is finally paying off.  Not hard to feed the beast when he is shooting as well as Laine currently is.

TSN: Did the NHL, Jets follow proper concussion protocol with Byfuglien?  Hockey Insider Darren Dreger takes a closer look at Dustin Byfuglien’s somewhat surprising return to the game against the Penguins following a collision with Jamie Oleksiak on Tuesday night.

Topics: Jets/Penguins Recap, Connor Hellebuyck’s struggles, Ron Hextall is fired as General Manager of the Philadelphia Flyers, Is Chuck Fletcher going to be the next GM in Philly, The Blackhawks trade Nick Schmaltz to the Arizona Coyotes for Dylan Strome/Brendan Perlini, Buffalo Sabres win 10th game in a row and sit 1st overall in the NHL.