For the third time since February 5th he is heading back up to the Jets. 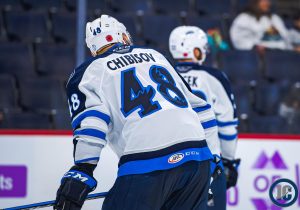 The yo-yo week for Andrei Chibisov continues as he has been recalled back up to the Jets today after playing in last night’s 1-0 Moose win over the Admirals.  This is the third time since his first recall on February 5th that the big forward heads up to the NHL.  With both the Jets and Moose in the city it has allowed the team to send him down to play games for their minor league squad.

With the news that Adam Lowry and Mathieu Perreault are still week-to-week it would seem likely that he makes his NHL debut at some point if they continue to recall him.  May as well see what you’ve got.

The Jets play the Blackhawks tonight.