Winnipeg Jets reassigned Mikhail Berdin to the Icemen of the ECHL

Moose announced today the Winnipeg Jets have reassigned goaltender Mikhail Berdin from the Moose to the organization’s ECHL affiliate, the Jacksonville Icemen. 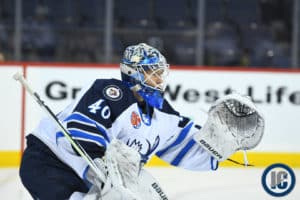 It has been quite the pro start for Mikhail Berdin (2016 6th round pick of Jets in 2016) who started off his ECHL career by going 3-0-0 and following that up by going 3-0-0 in the AHL with the Moose with a 1.92 GAA and 0.941 save %.   With Eric Comrie returning from his trip to Finland with the Jets for the Global Series the organization needed to make a  decision as to what they wanted to do since it meant they had three goalies with the Moose.  In the end they chose to return Berdin to the ECHL where he will get the majority of the starts.

There is a lot of reason for excitement after what we have seen over the last week and it won’t be long, I suspect, before we see him back in the AHL.  And if what we saw on Friday night is any indication fans in Winnipeg are going to enjoy watching him both on and off the ice.