Update:  According to Bob McKenzie via twitter “everybody on waivers yesterday (except Berube, Corrado and Byron) cleared.” which for Jets fans means Jay Harrison was not claimed and he has cleared waivers.  Jets just sent a release saying he has been assigned to the Moose. 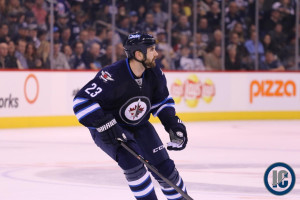 Ken Wiebe of the Winnipeg Sun had tweeted that Harrison wasn’t out for the AM skate today.  Following this news, Bob McKenzie of TSN tweeted that the Jets have placed veteran defenceman Jay Harrison on waivers:

The 32 year old defenceman played 35 games with the Jets last season finishing the season with two goals and three assists. He was acquired back on December 18th, 2014 from Carolina for a sixth-round pick (Ottawa’s) in the 2015 NHL Draft.