Byfuglien will play against Wild tonight.

With the Jets up 4-1 on the Predators with 13:46 left in the 3rd period last night Winnipeg defenceman Dustin Byfuglien and Nashville forward Cody Bass got entangled along the boards.  As Bass fell to the ice he managed to pull big #33 down with him.

Jets fans had to be sickened to see Byfuglien, who had been dominant throughout the game, writhing in pain on the ice following the incident. 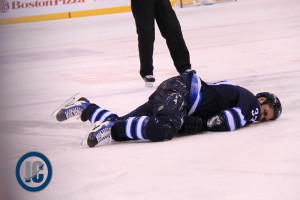 He didn’t return to the game.  The Jets then blew a three goal lead although Winnipeg did manage to win the game in OT.  Many fans suspected a bad prognosis for their prized defenceman but in Coach Paul Maurice’s post-game news conference he told the media that Dustin Byfuglien would be traveling with the team to Minnesota where the Jets will face the Wild tonight in St. Paul.

This morning coach Maurice met with the media in St. Paul and said “Byfuglien will be in the lineup tonight” according to Sara Orlesky of TSN.  This seems miraculous considering the picture above but fans have to be elated to hear this news.

For the latest Jets news be sure your’re following @illegalcurve as well as the author @icdave on twitter.