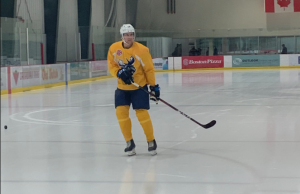 Jets 2018 2nd round pick David Gustafsson was IR skating today on his own ahead of Moose practice at the IcePlex.  He is still dealing with an injury he sustained in the World Junior Tournament which saw him and his Swedish team win a bronze medal.

Following skate Moose head coach Pascal Vincent advised me that “I don’t think he is going to play this weekend but after the break he should be good to go.”

The Moose play the Wild in Iowa this weekend on Friday and Saturday followed by the AHL All-Star break on Monday, January 27th.  Manitoba resumes their road trip on Friday, January 31st in Rockford.

I spoke to Gustafsson following his skate and ahead of Moose practice about a number of topics.  Our 1 on 1 will be on site tomorrow.