The Jets 2016 1st rounder will be out with an upper-body injury. 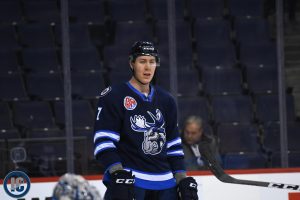 A frustrating season for Jets 2016 1st round pick Logan Stanley has gotten a bit more frustrating as he will be on the shelf for this weekend series against the Wild according to Moose head coach Pascal Vincent who labeled the injury as an upper-body injury. He isn’t expected to be out “long term” according to the Moose bench boss. Stanley blocked a shot with his hand in the last game on Sunday in a 5-1 win against the Rocket. After this weekend in Iowa the Moose will be on their All-Star break so Stanley will have at least a week or so to rest and recover.

In 30 games with Manitoba he has two goals and five assists.

He has already missed time earlier this season. Just five games into the season he left the game in the 2nd period against the Wild, was held out of the sixth game of the year in Iowa for precautionary reasons and was then listed by his coach as likely to miss almost a month of the season.

When I asked coach Vincent on Tuesday if he thought they would need to make a recall he indicated that he expects to receive some players back from the Jets who will be on their All-Star and Player break starting tomorrow.