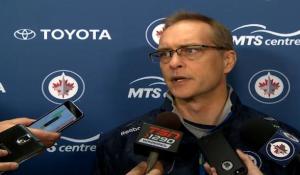 Coach Maurice – Lineup talk for tomorrow’s game.  Peluso’s physicality.  Thoughts on Bogosian’s game?  When is Bogosian at his best?  Bogosian’s six season in the NHL.  How close are Scheifele/Wheeler/Kane to forming a line?  Is he going to have patience with them?  Why did Byfuglien not play as much towards ends of the game?  Frolik’s role on this team?  Did Byfuglien injury happen before or during the game?   Where is Josh Morrissey on that teenage learning curve?  Can he compare Josh Morrissey to Jacob Trouba?  Will Jim Slater be in the lineup soon (expect him for game against Wild)?  O’Dell missing practice (Upper body injury that is more significant than day to day).  Any other injuries?  Does it make it more difficult when there are fewer NHL names in a game to evaluate his team?  What does he know about goalie Danny Taylor?