Note:  Day 6 of the Jets training camp is today and with tonight’s home game against the visiting Edmonton Oilers at 7 pm, camp remains at the MTS Centre and is closed to the public.  The playing group will be on the ice at 10 am and the non-playing group is off.  Here is the Jets lineup.  Be sure to stick to @illegalcurve for all the latest news.

Winnipeg Free Press:  Prominent prospects will get opportunity to get right back at it.  I think these guys will welcome the opportunity to be a bit tired if it means they are getting a chance to play more in the NHL and help make their case to remain with the club.

Winnipeg Free Press:  Could this be the Jets’ new No. 1 line? Making their Mark.  Speed, skill and smarts would be the attributes of this trio.  From what coach Maurice said yesterday he is likely to give this line a bit of time to develop chemistry as the season gets underway.

Winnipeg Free Press:  NHL banning lid-less fights a no-brainer.  Gary talks about the benefits of preventing players from removing their lids during a tilt. 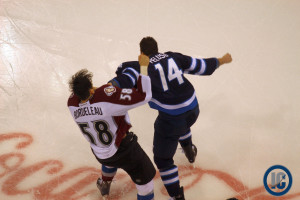 Winnipeg Free Press:  Slater hopes dark days behind him.  When healthy he gives the Jets a nice option at 4th line centre and both the team and the player have to be hoping for an injury free season.

Winnipeg Sun:  Morrissey in no-man’s land.  I thought he handled himself well with the line of Jr questioning.

Winnipeg Sun:  Byfuglien, O’Dell sit out Winnipeg Jets practice with injuries.  Byfuglien’s sounded relatively minor but O’Dell sounds like it could be a bit longer before he sees some action.

Sportsnet:  Evaluation continues of Jets rookies as Oilers visit.  They may be young players but both Trouba and Scheifele were offering up sage wisdom for the “young” prospects in the lineup.

TSN 1290 Winnipeg:  Rona Roundtable (audio).  Rick spoke with Adam Lowry about the game against the Wild and being in the early group yesterday which likely means he will see action tonight against the Oilers.