A report of the Jets skate at the IcePlex. 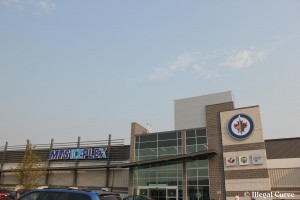 The Jets were originally scheduled to hit the ice for a 12 noon skate following a 3-2 loss last night in Dallas.  Coach Maurice switched that to an off ice workout.

We did learn via Ted Wyman of the Winnipeg Sun that according to coach Maurice winger Drew Stafford won’t play on Thursday and is considered day to day with an upper body injury.  The Jets bench boss has indicated that he will make a call up from the Moose who are at home and getting ready to face the San Diego Gulls.  I’m expecting it to be Andrew Copp or Marko Dano.  Jack Roslovic is benefiting from playing not upstairs in the pressbox watching while Brendan Lemeiux is still getting into form. Petan, De Leo and Howden would also merit some consideration but not above the guys I just mentioned in my opinion.

Mathieu Perreault:  Is there a building block from last night’s game?  Generating offence “the right way”.  How do they manage it mentally when they get good chances but it doesn’t go in.  Getting on a roll starts tomorrow before they head on the road.

Joel Armia:  Getting confidence.  Did he feel that the team was close last night to the way they would like to play this season?  How does the body feel when they get home at 2 am and then turnaround and get ready for the game tomorrow night.  Four games in five and a half days, how does he approach it?  On the home and home with Dallas.

Paul Maurice:  How is his team feeling both mentally/physically after that one?  Stafford injury update.  Will he call someone up from the AHL?  Has he seen Joel Armia ever play that confidently before?  On the chances that Matthias had in last night’s game.  Did Byfuglien take a “step forward”.  Expanding on what the team is missing without Bryan Little.  Is it harder for younger players to get through a grind like the Jets have upcoming?  Is it more challenging have a grind to the schedule earlier in the season?  On his preference for travel.  On being easier for older players.  How much time is too much time for a player (in reference to Byfuglien playing almost 30 minutes per game)?  What does all these games do to the psyche of a head coach?