A report from the Jets skate at the MTS Centre. 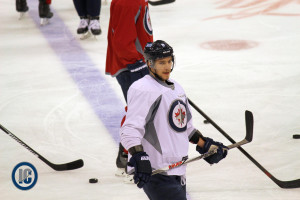 The Jets hit the ice for a skate this morning at the MTS Centre following a day off on Saturday.  According to Ed Tait of the Winnipeg Free Press Mark Scheifele, Adam Lowry and Drew Stafford were not on the ice.  We will get an update from coach Maurice following the skate.  Winnipeg takes on Colorado tomorrow night at the MTS Centre.

Update II:  The Jets have placed Drew Stafford and Adam Lowry on IR retroactive to January 14th, 2016.  And they called up JC Lipon and Patrice Cormier.