The Jets will practice in Winnipeg before they kick off six straight at home. 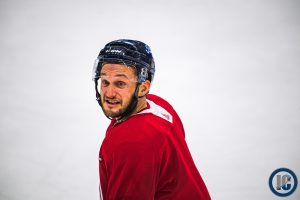 The Jets made a solitary stop in St. Louis last night in the midst of a long stretch of games at home and which saw them beat the defending Stanley Cup champs for the second time in a week.

Luca Sbisa didn’t finish last night’s game so his status will be in question today following practice.  Another curious case is that of defenceman Tucker Poolman who was injured on January 12th. On the 13th bench boss Paul Maurice said he could play on road trip (pre-break) or would be ready post-break and then on January 30th he was skating every second day according to coach.

According to Mitchell Clinton of Jets TV Tucker Poolman has joined Bryan Little in non-contact jerseys.  He also indicated that Blake Wheeler, Luca Sbisa and Dmitry Kulikov are not on the ice for today’s practice.

Sami Niku on the game last night against the Blues, facing big/physical teams and the recent success of the Jets.

Kyle Connor on not taking any opponent lightly and the confidence they gain when Connor Hellebuyck is playing the way he is.

Gabriel Bourque on the way team has played since the break, getting contributions from entire lineup, what he has seen from Hellebuyck and the boost it has given the team and playing in his 400th NHL game last night.

Coach Maurice:  What does the support staff mean for a coaching staff at this level?  Any update on Sbisa?  Status of Kulikov/Wheeler?  Update on Poolman?  Next stretch against teams below the playoff line.  Reducing goals against.  Andrew Copp’s play.  Is there anything he is noticing with the goalies following the break?  Plan for the goalies.  Anything new on Bryan Little?  More on Little.  Jimmy Roy’s number being retired by the Moose tonight.

Jets coach Paul Maurice provided an update on Luca Sbisa indicated that the X-rays were negative but that he is likely too sore to play tomorrow and that he is day-to-day.  He also added that Tucker Poolman, who wore non-contact today, could be a player for the Jets in three or four days.

There will be a test on Bryan Little in the next few days but it doesn’t sound like there is a timeline on the veteran centre.  “This one there isn’t a window on this.”  You can read his full comments on Little here.

Laurent Brossoit will start against the Senators according to the Jets bench boss.

The Jets will take on the Senators tomorrow afternoon at 1 pm.  Be sure to keep it locked to illegalcurve.com for the AM Papers which go live at 7 AM and you will also be able to listen to the Illegal Curve Hockey Show on TSN 1290 Winnipeg which will go live also at 7 AM.