After a day off on Friday the Jets are back on the ice today to get ready for the Preds. 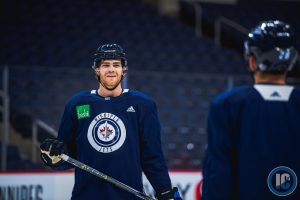 The Jets were scheduled to practice yesterday but after a back-to-back with the Leafs and Bruins on Wednesday and Thursday the decision was made to give the team the day off.  Today they are back in business as they get ready to face off against the Predators on Sunday to kick off three straight games at Bell MTS Place.

As per Ken Wiebe of the The Athletic Winnipeg no Blake Wheeler at today’s practice.  He is the only player missing.  Ken also provides the line rushes and pairings listed below.

Patrik Laine on facing a Predators team with a new coach, what has he seen from Mark Scheifele and the struggle at home (Bonus: his thoughts on Nikolaj Ehlers hair cut).

Josh Morrissey on facing a team with a new coach and the results for the Jets of late.

Adam Lowry on whether the Jets change their approach when getting ready for the Predators, added emphasis of this being a divisional game and what Mark Scheifele is doing well.

Jets coach Paul Maurice on facing a familiar team with a new coach, team being aware/ready for divisional games, facing Roman Josi, status of Wheeler, flipping Copp/Roslovic, play of Mark Scheifele, how much concern is there with the high-danger chances they are giving up vs getting, whether the rebound chances are too high, is that a goalie thing and whether things are as bad with their internal numbers as the publicly available data?

The Jets will face the Predators tomorrow afternoon at 1 PM CT.  Be sure to keep it locked to illegalcurve.com for the AM Papers which go live at 7 AM.