The Jets practice at the IcePlex ahead of three games on the road in California. 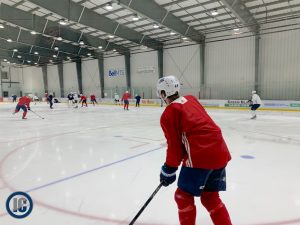 After a day off on Sunday the Jets were on the ice at their 8th Annual Skills Competition last night.  While these events are all about fun last night was informative as well considering Josh Morrissey who didn’t play in the 3rd period of Saturday night’s game against the Blue Jackets was a full participant yesterday.  As was goalie Laurent Brossoit.  Nathan Beaulieu did not participate.  Neither did Jets captain Blake Wheeler who was in street clothes on the bench.

Josh Morrissey and almost all of his Jets teammates hit the ice for practice today at the IcePlex. The only missing player was Nathan Beaulieu.

Coach Maurice:  Update on Nathan Beaulieu?  Which guy is going in?  Any update on Bryan Little?  On the attitude that Anthony Bitetto brings to the team.  On Bitetto being “good in the room” and what that means.  On why the team is a good road team/good at one goal games.  Facing a Sharks team that shell shocked them in terms of shots the last game.  The play of the Scheifele line.  What has he liked about Blake Wheeler up the middle.  On the Mike Babcock situation and his experience with past players.  His evolution as a coach.

Coach Maurice was asked about Bryan Little and Nathan Beaulieu.  He didn’t have a timeline for Little but did indicate that a reasonable assumption that it is long term (more than two or three weeks).  Nathan Beaulieu won’t be making the trip to California with the team and won’t be back on the ice for at least 7-10 days.  His full quotes about these two are here.

Wheeler up the middle:

While it doesn’t sound like Bryan Little is coming back anytime soon even when he does it sounds like Blake Wheeler could stay in the middle.  Coach Maurice indicated “The door’s still open that Blake Wheeler stays at centre.  That’s a possibility down the road and then you change the other pieces around him because he’s a big strong, physical man and with our defence learning on the go, they’re competing real hard, having a big man in the middle of the ice has been very, very good for us.”

The Jets head out on the road for three games starting with a contest against the Sharks in San Jose on Wednesday.  Be sure to keep it locked to illegalcurve.com for the AM Papers which go live at 7 AM.