After a day off on Friday the Jets are back on the ice today. 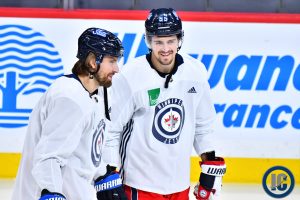 The Jets had a day off on Friday following their 3-1 loss to the Islanders on Thursday night.

Via Ken Wiebe of The Athletic Winnipeg there was no Anthony Bitetto (lower body) or Mark Letestu (undisclosed) this morning.  Ken also provides the lines rushes below.

Coach Maurice scrum topics:  The ripple effect of Copp/Lowry down the lineup.  Update on Bryan Little?  How has Lowry handled his different roles?  What did he see from Little in practice?  What was important from him to see from that practice?  Team looking forward to opportunity.  What’s the latest on Letestu and Bitetto?  On Heinola coming back from three healthy scratches and playing with confidence.  On Pionk adapting to the Jets structure.  What needs to improve on the penalty kill?

Coach Maurice indicated that Anthony Bitetto is as day-to-day and he will join Mark Letestu, who is being shut down for rest of this month for further testing, on the injured reserve.

When asked about Bryan Little he added “He had a really good day today but we would wait to see how he is tomorrow before we make a final decision.”.  The Jets bench boss was asked about what he was able to see from Little in today’s practice “His first practice with the group and it wasn’t a very heavy practice he didn’t really look, he’s still a really good player, but he didn’t look like himself.  Today he’s moving like Bryan has always moved.  He got up and down the ice and made some plays.  But he worked real hard.  At the end of it he’s got a big smile on his face.  It was a fast and was kind of a hard practice in terms of the pace of it and he handled it fine.  So he’s feeling good.”

The Jets will face the Oilers tomorrow night at Bell MTS Place at 6 pm. Be sure to keep it locked to illegalcurve.com for the AM Papers which go live at 7 AM followed by our pre-game report at 9:30 AM.