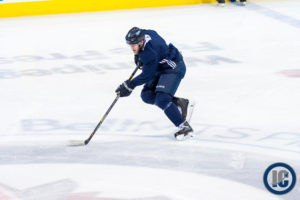 The Jets are fresh off a 5-1 win over the Stars as they regained top spot in the Central over the Predators by a single point (with two games in hand).  They are six points up (with a game in hand) on division rival Colorado who sit third in the Central and who will be here tomorrow night to take on the Jets to conclude this two game home stand.  The Avalanche are in a bit of a tailspin having gone 3-5-2 in their last 10 games

According to Brian Munz of TSN 1290 Winnipeg the only player for the Jets not on the ice this morning who played in the game last night is Mathieu Perreault.

Coach Maurice:  On the Jets power play.  What is the change in dynamic when 33 isn’t on the power play?  On choosing shots on the power play.  Challenges in the stretch.  Does this team need a tough stretch?  Does he want to recapture what they did in the back half of last season?  On the challenge of being cranked up emotionally.  Does he notice any difference with the D when they are playing more?  Status of Perreault.

With Mathieu Perreault missing from skate the question was whether he was injured or if this was simply maintenance.  At the end of today’s availability he was asked if Perreault was OK and the Jets bench boss indicated “Yes”.

The Jets face the Avalanche tomorrow at 7 pm CT in Winnipeg.  Be sure to keep it locked to illegalcurve.com for the AM Papers which go live at 7 AM followed by our pre-game report at 10:30 AM.