Check out the latest from the Jets practice at Bell MTS IcePlex. 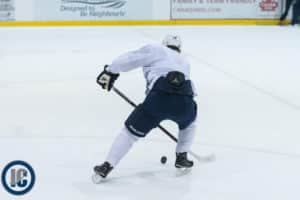 The Jets are back in action today following a 1-0 loss to the Blues last night which kicked started the four-game home stand.

As per Ken Wiebe of the Winnipeg Sun a few players not skating including Blake Wheeler, Mark Scheifele and Andrew Copp.  Joe Morrow is skating in a non-contact uniform.

Coach Maurice:  Status of Josh Morrissey for tomorrow?  Thoughts on Dmitry Kulikov’s game?  On Josh Morrissey’s play before the injury.  The growth in Morrissey’s game.  Are Scheifele/Wheeler maintenance?  Who starts in net for the Jets against the Flyers?  Update on Copp?  On Morrissey’s video prep.  On the impression that Cam Schilling left with him.  On what Logan Shaw is doing with the Moose.

Coach Maurice provided updates on some players including: Josh Morrissey “He’ll come to the rink as a player and then we’ll make sure he feels as good tomorrow as he does today and make that decision.”, Mark Scheifele and Blake Wheeler who both didn’t skate today were held off because of the minutes they played last night (both played 25+ vs Blues), Andrew Copp being placed on the IR was a “numbers thing” because they knew he wasn’t playing within the seven day block but added “he hasn’t felt right since the Island but he’s getting better and feeling better so hopefully soon.”

Coach Maurice confirmed that Connor Hellebuyck gets the start against Philadelphia.

The Jets face the Flyers tomorrow afternoon at 2 pm here in Winnipeg.  Be sure to keep it locked to illegalcurve.com for the AM Papers which go live at 7 AM followed by the Jets pre-game report at 10:30 AM.