Note:  The Jets practiced on Saturday and prior to it getting underway they reassigned Cam Schilling which would appear to mean that Josh Morrissey is ready to play again.  While the coach didn’t give him the 100% all clear you’d have to think he is ready to play this afternoon against the Flyers.  Philadelphia played yesterday afternoon in Buffalo in a game that saw them score four goals in the 3rd to win the game and improve to 2-0-1 in their last three.  Puck drop is at 2 pm today at Bell MTS Place.  Check out the Winnipeg Jets pre-game report and come back after the action for the Jets post-game recap.

Note II:  The Moose were gone for almost two weeks in California but have now completed the six-game road trip with last night’s action in Stockton.  They lost 3-2 in OT to the Heat which means they went 2-3-1-0 on this trip and sit 11-12-2-0 overall.  They will return to Winnipeg and will have to turn their focus on last year’s Calder Cup champs when the Toronto Marlies come to town for a pair of games.

Winnipeg Sun: Morrissey uses time off wisely.  Ken has more on what the Jets top pairing D man did during the time he wasn’t playing. 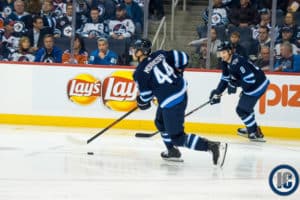 Winnipeg Sun: Five keys to Jets vs Flyers.  Ken’s big matchup is Blake Wheeler vs Claude Giroux. His five keys are: 1) More shots required. 2) Another boost on the back end. 3) Finding his groove? 4) Wheat Kings connection. 5) Beasts of East?

Winnipeg Sun: Veteran D-man Cam Schilling showed well with Jets.  He equated himself very well when given a chance to play with the big club.

Global News:  Jets players help student make it to her exam on time.  Always nice to hear about players doing things like this for folks.

Sportsnet: Ron and Don feel that Patrik Laine should be more like Guy Lafleur. The Jets winger, who entered Saturday tied for the league lead in goals with 21, would be better off playing a more gentlemanly game, Cherry put forth on Coach’s Corner.

Topics: Jets – Blues Recap. Kyle Connor and his next contract. Jets – Flyers Game Preview.  A look at the California road trip for the Manitoba Moose.

Topics: WHL’s Kootenay Ice expected to re-Locate to Winnipeg. Which Canadian team has the best chance at a Stanley Cup this Season? Drew Doughty calls out lack of emotion and compete level of the Kings. Ryan Reaves comments about his hit on Tom Wilson.