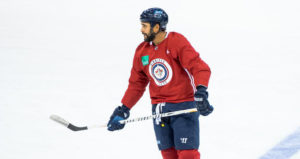 The Jets are back in Winnipeg and hit the ice for a practice ahead of the game Friday night with the Blues.  This will kick off the first of four straight at home for Winnipeg.

As per Mike McIntyre of the Winnipeg Free Press some changes are afoot (or askate) this AM “No Josh Morrissey, Joe Morrow or Andrew Copp. Everyone else out there, including Dustin Byfuglien and Dmitry Kulikov in regular full-contact jerseys.”.  The line rushes and D pairs listed below are via Brian Munz of TSN 1290 Winnipeg.

Coach Maurice:  Updates on Byfuglien/Kulikov?  Any update on Morrissey/Copp/Morrow?  On Andrew Copp’s progression.  What is he expecting from the Blues in their fourth meeting in first few months of the season?  What did the players learn from the east coast road trip?  Was the comeback against the Rangers something the team can use later on?  What did he learn about his team?  Did he learn something about the three defencemen called up from the Moose?  What goes into a team not using injuries as an excuse?  His thoughts on hazing.

First up on the agenda for the Jets coach to discuss were Dustin Byfuglien and Dmitry Kulikov who both took part in skate and whether they may play tomorrow night against the Blues he said “All those decisions will come tomorrow.  They got through it, felt good and then we’ll give it another 24 hours and see how they feel tomorrow.”  The three injured Jets who didn’t skate were Josh Morrissey, Andrew Copp and Joe Morrow and the bench boss indicated “I don’t have Joe in for tomorrow.  Again we’ll see how the other two guys come in tomorrow.”  He did add that Copp was “back pushing himself in the weight room so we’re just going day-to-day until he feels really good.”

The Jets announced that they have reassigned Nelson Nogier to the Moose.  Nogier made his first NHL appearance on Tuesday since he played 10 games with the club in 2016-17.

The Jets have a AM skate scheduled for 10:30 am on Friday ahead of their 7 pm puck drop with the Blues at Bell MTS Place.