Note:  The Jets were off on Wednesday following a successful three-game road trip which saw them earn all six available points.  Today they practice at Bell MTS Place at 11 AM as they get ready for four straight at home starting tomorrow night against the Blues.  Check out the Jets Practice Report.

Note II:  The Moose played game four of this six-game road trip in California last night which saw them fall 4-3 to the Condors which is their third straight loss.  Prior to puck drop we learned that they had lost both Seth Griffith and Ryan White to injuries although they got back Luke Green and Kristian Reichel. Even though the Moose lost last night’s game they did see some positive results as Logan Shaw registered his second hat trick of the road trip (giving him 9 goals in 10 games since he was signed by Winnipeg) and Michael Spacek put up three assists to give him the team lead with 12.  They have a practice scheduled for today in Bakersfield before they continue to Stockton to play the final two games on Friday and Saturday.

Winnipeg Sun:  Jets learn you can’t blow a lead you never had.  Paul Friesen tries to understand the mindset of a team with the talent the Jets have but with some of the issues that have popped up during this season.

Winnipeg Free Press:  Battle-scarred Jets fly successful mission to league’s eastern front.  (Paywall).  Not easy to head east at the best of times but then you add in missing Dustin Byfuglien and for the final game Josh Morrissey and you have a recipe for a disaster but the Jets managed to make something out of it after all.

Sportsnet: What Nylander’s contract could mean for two big Jets RFAs.  In addition to looking at this issue Sean also covers the road trip, Scheifele’s real-life game cheat and more. 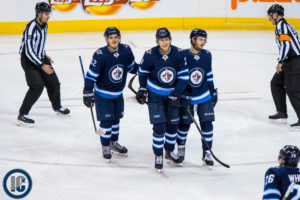 TSN 1290 Winnipeg:  Jets injuries have ripple effect throughout organization.  Moose play-by-play voice Mitch Peacock joined Andrew Paterson on the Afternoon Ride. They discussed the number of Moose players that have been called up to the Jets, the ripple effects throughout the organization, and which players are taking over the additional minutes.