Check out the latest from the Jets practice out at Bell MTS Place. 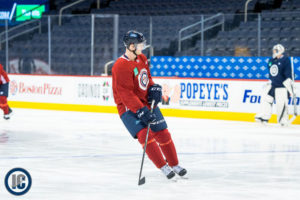 The Jets are rolling at home right now having won three straight at Bell MTS Place including last night’s 3-1 win over the defending Stanley Cup champion Washington Capitals.  It wasn’t all good news for Winnipeg as the Department of Player Safety indicated that Josh Morrissey will have a hearing for his hit on TJ Oshie in the final minutes of the game.  However the focus now is back on the ice for practice as they prepare to close out this four game home stand against Buffalo tomorrow night.

According to Ken Wiebe of the Winnipeg Sun all are present and accounted for with the exception of Dustin Byfuglien.

Coach Maurice:  What are his immediate thoughts on the Josh Morrissey situation with TJ Oshie.  Goalie plan for tomorrow?  On the report out of Finland that Kristian Vesalainen is heading back to Europe.  The Jets penalty kill.   On his adjusted lines and reuniting TLC.  Thoughts on Laine/Connor.  What has Kyle Connor done to earn a place on the PK.  Is the back-to-back next week factor into his decision to start Brossoit?

Jets face the Sabres on Friday night with AM skate getting underway at 10:30 AM at Bell MTS Place and puck drop at 7 pm.