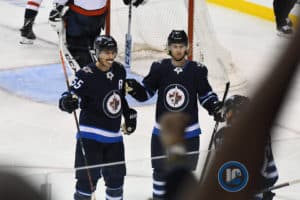 Each and every season Jets top centre Mark Scheifele continues to hone his craft as he seeks to establish himself as one of the top players in the NHL.  Last night he scored on the Jets lethal power play making no mistake with his 10th goal of the season which tied the game in the 2nd period.

“Mark Scheifele became the sixth active player to require 17 or fewer games to reach the 10-goal mark in three or more consecutive seasons.