Check out the latest from the Jets practice in downtown Winnipeg. 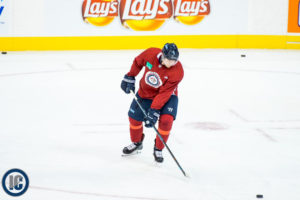 Following last night’s 3-1 win over the Hurricanes to kick off a six-game homestand the Jets are back on the ice to prepare to face the Oilers tomorrow night.  The buzz pre-practice was news that Marko Dano who was placed on waivers yesterday had been claimed by the Colorado Avalanche.  The team also activated Nic Petan onto the active roster.

No Trouba, Byfuglien or Morrissey at practice today according to Jamie Thomas of Jets TV.

According to Jason Bell of the Winnipeg Free Press it looks like Brendan Lemieux could be making his regular season debut as he is taking line rushes with Jack Roslovic and Mathieu Perreault.

Coach Maurice:  Thoughts on Marko Dano being claimed.  Thoughts on Brendan Lemieux.  On the challenge of “getting up” for games during the regular season.  What areas does he see maturity in Lemieux’s game from last year to this year?  What impact did Hendricks have on Lemieux?  What has he seen from Joe Morrow now that he is an NHL regular?  On the pitfalls of teams that have success in the previous season and avoiding falling short.  On the availability of the three D (Byfuglien, Trouba & Morrissey) who missed practice?  Would he consider playing Brossoit against his old team?

Coach Maurice was asked about the three defencemen missing from skate today being Dustin Byfuglien, Jacob Trouba and Josh Morrissey and he indicated “Dustin skated this morning, he’ll skate again tomorrow, so he’s possible for tomorrow night. We expect the other two to play.”.

Oilers at Bell MTS Place on Tuesday night at 7 pm. The Jets are scheduled to skate at 10:30 am in downtown Winnipeg.   As always stay tuned for the latest Winnipeg Jets news by keeping it locked to illegalcurve.com and on social media including Twitter | Facebook | Instagram.  And you can follow me on twitter as well (@icdave).