Note:  The Jets had a busy Monday which saw Marko Dano get claimed off waivers, Nic Petan added to the active roster and a busy practice which saw Brendan Lemieux join the line rushes with Jack Roslovic and Mathieu Perreault.  We will have to wait until morning skate at 10:30 am (provided it isn’t an optional) to know what the lines will look like.  The Jets pre-game report will get you up to speed in advance of tonight’s 7 pm contest against the Oilers.

Note II:  The week of practice in preparation for the next double header continues for the Moose today as they are scheduled to hit the ice at 10 am for a practice at Bell MTS IcePlex.

The Athletic Winnipeg: It’s way too early to panic but the Winnipeg Jets need to be better. (Paywall). Although seeing folks losing their minds after five games is somewhat entertaining.  Clearly this team isn’t at the same level they were at when the previous season concluded but I agree with Murat that it isn’t yet time to get super concerned.

Winnipeg Sun: Five keys to Jets vs Oilers. Ken’s big matchup is Josh Morrissey and Jacob Trouba vs Connor McDavid. His five keys include: 1)  Get back in the groove. 2) Another Little step forward. 3) Win the special-teams battle. 4) Chipping in. 5) Better puck management. 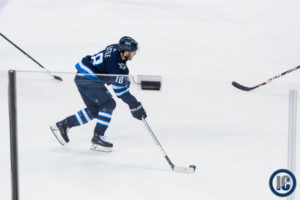 Winnipeg Free Press: Maurice wary of a playoff hangover. (Paywall).  As the Jets players have spoken about since last season concluded they didn’t win anything by making the Western Conference Final but it was a step in the right direction.

The Athletic Winnipeg: How can you stop Winnipeg’s PP1? (Paywall). Watching teams try to solve the problem of Winnipeg’s PP1 will be one of the more interesting storylines surrounding the Jets this year.

Sportsnet: Maurice, Jets cautious to avoid regression like past contenders. Head coach Paul Maurice had a front row seat when his Carolina Hurricanes went to the 2002 Stanley Cup Final against Detroit, then finished dead last in the entire NHL the following year. He knows.