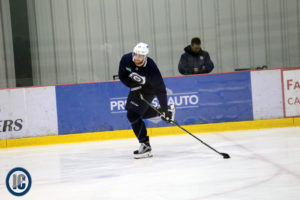 The Jets are back in business for a skate today at Bell MTS IcePlex as they prepare to face the Dallas Stars in Winnipeg tomorrow.

Coach Maurice:  Update on Scheifele/Lowry.  Do they have the same representative that Jacob Trouba did?  Was the last battle a test for Lowry/Scheifele?  Would there be any apprehension in putting them both back in tomorrow?  Updates on Enstrom/Kulikov.  Is Enstrom an option tomorrow?  On having to remove players from the lineup?  On minutes played.  What kind of urgency is he trying to create with his team?  Is there any thought about resting guys before the playoffs?  On Kulikov’s disappointment.  Any updates on Mason/Hutchinson?  On Comrie’s mindset.

Two players who are getting closer and closer to returning are centres Adam Lowry and Mark Scheifele.  Following skate coach Maurice indicated “Both felt good going into the practice and they both got through it well.  We’ll wait to make sure they come back in (healthy) tomorrow but they are knocking on the door now.  So, they may be in tomorrow.”

One player who seems close is Tobias Enstrom.  Jets bench boss had this to say about his veteran defenceman “Toby skated full today.  With him we’ll see how he feels tomorrow.”  When asked if Enstrom was an option for tomorrow he indicated he was.

Defenceman Dmitry Kulikov who has been out since a game against the Devils and his season done for awhile as coach Maurice said the veteran Dman is having back surgery and will be out two months.  “He is out eight weeks until kinda the next window of progress.  We’ll see where he is at.  That doesn’t mean he is back in eight.  The next report I will give you is in eight.  He had a reoccurrence with the injury that he was dealing with in Buffalo.  It didn’t build.  He was fine and then he wasn’t.”.

Once again the Jets are dealing with two injured goalies.  Not big news but Michael Hutchinson who is dealing with a concussion “Can’t tell you much about Michael because it’s a concussion issue.  Other than he’s feeling better and he’s back.  He is active now.  So he is not completely away,  he’s on the bike”.  With regard to Steve Mason, who had a score this past Monday, “Says he feels good.  That’s still the two to three week window.  So that puts him into April when he would be back in the net.”