Note:  The Jets kicked off this six-game homestand on Thursday rolling to a big 6-2 win over the Blackhawks.  They had the day off on Friday and return to practice today at the IcePlex at 11 am.  Plenty of focus will be on today’s practice as both Adam Lowry and Mark Scheifele are hoping it goes well and helps them show their coach that they are ready to return to the lineup tomorrow night against the Stars.  The Jets Practice Report will have all the latest.

Note II:  Prior to puck drop news broke that Nelson Nogier would be making his regular season debut for the Moose after missing the entire season to date with an injury that he suffered in the first shift of the first pre-season game in North Dakota.  This team has a never quit attitude (especially on the road) and with just 67 seconds left in a 2-1 game leading scorer Mason Appleton tied it up with his 19th goal of the season.  Shortly thereafter Nic Petan won it in OT on a nice individual effort.

Winnipeg Sun:  Jets sniper quietly sets teen scoring streak standard.  The sophomore doesn’t seem particularly wowed by any of his accomplishments and that isn’t particularly surprising in the “put the team first” mentality we often get with hockey players.  Still what he is doing is quite remarkable as Paul outlines. 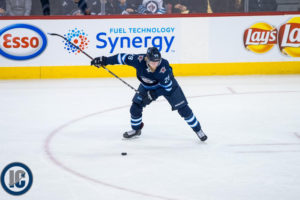 Winnipeg Free Press: Perusing Jets potential playoff partners.  (Paywall).  Who would you like to see Winnipeg face in the first round?

Winnipeg Free Press:  Jets about to pay for doing things the ‘Chicago Way’.  (Paywall).  Suspect fans would be willing to be in this predicament for one cup let alone three but the point is a fair one.  The prices are about to go up for players like Trouba, Laine, Morrissey and Hellebuyck.

Sportsnet:  How less ice time has improved the Winnipeg Jets’ defence.  Adding Jacob Trouba to the mix will sure help even things out as well.

Illegal Curve:  Patrik Laine sets NHL record for longest points streak by a teenager.  It will be really interesting to see how much longer he can keep this streak alive.

TSN 1290 Winnipeg:  Trouba was prepared for return.  TSN Jets analyst Kevin Sawyer discusses the Jets win over Chicago, the playoff race in the Central, next week’s Jets homestand, Jacob Trouba’s return, what the Jets lineup might look like in the playoffs and Patrik Laine’s point scoring streak.

TSN 1290 Winnipeg:  Kyle Connor has put together a very good season.  Dennis Beyak discusses the Jets win vs. Chicago, the off-side challenge from the first period, the contributions from Jets players on entry level deals, and Ben Chiarot’s strong play this season.

TSN 1290 Winnipeg:  Jets are in good position.  Tyler Dellow of the Athletic discusses what he’s seen from the Jets after 70 games, Chicago’s decline this season, if teams can remain competitive while playing two players over ten million dollars per year, and what to expect from Vegas in the playoffs.

TSN 1290 Winnipeg:  Jets getting bounces and good goaltending through injury stretch.  The Athletic Winnipeg’s Murat Ates joined host Kevin Olszewski to break down the numbers on the Winnipeg Jets and gives his breakdown of the win over Chicago on Thursday night.

Illegal Curve: Prospect Nelson Nogier makes regular season debut.  After suffering an injury in the first shift of the first pre-season game in Grand Forks the prospect defenceman finally got into a game in his sophomore season.