Latest from the Jets practice in Anaheim at Honda Center. 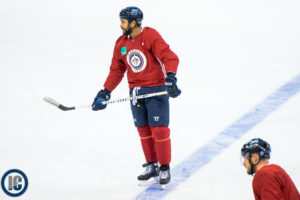 The Jets have finished two of their four games on the road trip after last night’s win in L.A..   The team is practicing at Honda Center today as they prepare to face the Ducks on Friday in Anaheim ahead of tomorrow’s 3 pm CST game against the Ducks.

According to Brian Munz of TSN 1290 Winnipeg the Jets worked on their power play today during practice.  Projected lines from Brian as well.

Coach Maurice confirms that Connor Hellebuyck is back in the net tomorrow against the Ducks.  The Jets goalie will put his 11-2-2 record (2.45 GAA, .925 save %) to the test against a Ducks team coming off a 4-2 loss to the Golden Knights where they were outshot 49-19.

Coach Maurice:  What stands out for him reflecting back on last night’s game?  What does he expect for tomorrow’s game?  Starter tomorrow?  Are the Jets comfortable being a winner?  On guys being aware of standings.  How did he train himself to focus on today?  Being above the line at U.S. Thanksgiving.  What does a coach look for when you are looking for your optimal lineup?  Hard to stay patient with the second line?  Further focus on the second line.  Will he keep the D lines jumbled?