Note:  Following last night’s 2-1 win over L.A. the Jets will head down the road to Anaheim to practice this afternoon at Honda Center.  They will prepare to face a Ducks team (who were embarrassed at home by the Golden Knights last night) on Friday afternoon in the third game of this four game road trip for Winnipeg.  Today’s practice is at 3:30 pm CST ahead of tomorrow’s 3 pm CST game against the Ducks.  Update: Check out the Winnipeg Jets Practice Report for the latest from Anaheim.  Click here.

Note II:  The Moose hit the ice at IcePlex at 9 am prior to leaving on a three-game road trip that sees them head to Grand Rapids, Milwaukee and Rockford.

The Athletic Winnipeg:  Q&A with Kevin Cheveldayoff on trusting the process, Dustin Byfuglien, and his playing days.  (Paywall).  The veteran scribe goes one on one with the Jets GM for his latest piece on the Athletic.

Winnipeg Sun:  Kings get Mase’d by Jets.  It was an 11 day layoff between starts but Steve Mason was certainly not showing any ill effect from the time off as he looked sharp in the win.  Ken recaps the game from Staples Center.

Winnipeg Free Press:  Mason builds a brick wall, barely beatable by Kings in Jets 2-1 win.  (Paywall).  Jets were feeling a bit snarly after a poor performance in Nashville and a heavy game against the Kings was just what they needed.  Of course Steve Mason’s performance helped just a wee bit.  Jason recaps the game from LaLa land.

Winnipeg Free Press:   Second line going back to basics.  (Paywall).  With the team continuing to win you can afford to have patience but there just doesn’t seem to be the right mix on this line.

L.A. Times:  Kings continue their slide with a 2-1 loss to the Jets.   Read about the game from the perspective of a beat writer that covers the Jets opposition.

The Athletic Winnipeg:  Jets can be even better and it starts with Blake Wheeler. (Paywall).  The Jets have been reliant on their goalies strong play and if they can continue to tweak things with their forward group they can hit even greater heights. 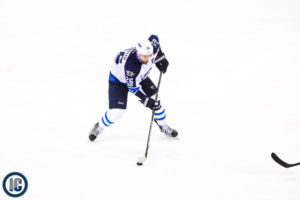 Sportsnet:  The Winnipeg Jets have arrived.  So says this bold headline.  The author delves into the good, the bad, what’s trending, a bold prediction and gives them a grade.

Illegal Curve:  Post-game report.  Head back inside Staples Center to check out our quick game recap, some notable numbers and post-game video from coach Maurice.

TSN Hockey Insider Darren Dreger speaks with Andrew Paterson and Rick Ralph about the Oilers issues, the Winnipeg Jets place in the standings after twenty games and how GM Kevin Cheveldayoff will approach the rest of the season.