The Jets had the day off yesterday but had a very intense, uptempo practice today at the MTS Centre. Here are the Jets comments following practice. 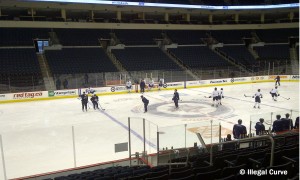 The Jets had the day off yesterday but had a very intense, uptempo practice today at the MTS Centre. Tobias Enstrom, Ron Hainsey and Eric Fehr were all on the ice in regular practice gear.  Dustin Byfuglien and Nik Antropov were not on the ice.

Andrew Ladd – The Jets captain (and birthday boy) spoke about what they can expect from the Wild.  What the team learned in the loss to Detroit.  Was almost (:46 seconds in) the victim of a birthday prank by Big Buff and Nik Antropov (pie to the face).  Buff bringing him a cake was the giveaway.  Talks birthday gifts and curling.

Ron Hainsey –  Talks about his injury.  His discussion of “blocking shots”.

Zach Bogosian – Discusses challenge of the Wild.  Need to have a quick start.  Potential rivalry with the Wild.  Need for a bounce back game.  Talks curling (even though he didn’t participate).  Preventing ‘bad stretches’.  Tough week ahead.

Jim Slater  – Talks returning to Winnipeg.  Expectations from the Wild.  Matching up against a balanced team.  GST line chant.  Going home and playing in Michigan.  Red Wings as a future conference rival.

Tobias Enstrom –  Discusses his shoulder and how it feels.  Trying to get back into the lineup.

Coach Claude Noel – Player injury update. Talks upcoming game against the Wild. What they learned in loss to Detroit.