Check out the latest from the Jets availability at Xcel Energy Center. 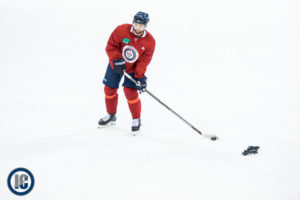 The Jets are back on the ice today in St. Paul after last night’s disappointing 6-2 loss to the Wild.  One of the big question marks is the status of Tyler Myers who was hurt in the 2nd period of last night’ game and did not return in the 3rd.  Additionally, questions surround the status of Tobias Enstrom who it was hoped would be back in time for Game 1 and Mathieu Perreault who was injured in game 1 after taking a number of big hits in the game.

It is an optional skate says Russ Hobson of Global News.

With respect to the Tyler Myers situation we are getting differing accounts.  Michael Russo of The Athletic Minnesota indicated via twitter at 12:33 pm that “Tyler Myers walked in with his Jets teammates. Seems to be walking without any limp” whereas Darren Dreger of TSN tweeted at 1:26 pm “Tyler Myers left the arena this morning in Saint Paul. Expect Jets head coach Paul Maurice to address his status in this series shortly.”.  All of which means we wait until coach is available for an update.

Coach Maurice:  Update on Tyler Myers?  How much closer is Enstrom?  Has Myers gone for testing?  How does he see the Foligno hit on Myers?  Do they need to tweak their game to adjust to the Wild?  How does he expect Hellebuyck to handle the last game?  Has he ever had a goalie he didn’t want to pull because “he couldn’t handle it”?  On the challenges that would face Poolman if he gets the call.  On the experience young Jets players have already gained in the playoffs.  On the goalie pull did he ask Hellebuyck or was it his decision?  On bouncing back from losses.  His list of reasons why the Jets game dropped off last night and will he address it today?  Is the level of confidence still high among the group?  Is game 4 a swing game so does he want the players to look at it like that or should it be just another game?  On the maturation of the young players.

As you would expect the cone of silence remains in place.  Jets coach Paul Maurice didn’t provide any updates on Tyler Myers, Tobias Enstrom or Mathieu Perreault although he wasn’t asked about Perreault it should be noted.   The mantra of this team may have to change from “Death from Above” to “Game-time Decision”.

Dreger added this later in the afternoon: “Belief is Tyler Myers on his way back to Wpg for treatment. Highly doubtful (obv) for game 4. Sounds like aggravated muscular injury.” I would have to think Sami Niku will be coming back the other way if Enstrom still isn’t ready.