Note:  For those hoping that Monday’s practice would bring some clarity on the Jets health situation it remained as muddled as ever.  Perhaps we will get some insight today when the Jets hit the ice at 11:30 am for morning skate at Xcel Energy Center in St. Paul and the pre-game report will bring you right up to speed with all the latest news. Stay tuned throughout the day for any and all Jets news and updates via Twitter |Facebook | Instagram.

Note II:  The Moose are back today as they officially begin their preparation for the return of AHL playoff hockey to Winnipeg.  The team may be without Sami Niku to start as I suspect he will be heading to Minnesota as insurance for the Jets with Tyler Myers reportedly heading back to Winnipeg on Monday and with the status of Tobias Enstrom still up in the air.  The 1st round series best of five series with the Grand Rapids Griffins gets underway on Saturday at Bell MTS Place.

Winnipeg Sun:  Ken’s Notebook.  Peer into Ken’s notebook as he looks at a number of Jets related topics including: 1) The Art of the rebound. 2) Ehlers close to finding back of net. 3) Time for Jets big guns to respond?

Winnipeg Sun:  Connor in the Hellebubble.  While Hellebuyck probably doesn’t like giving up six goals against the bounce back numbers for him after a bad game are pretty significant.

Winnipeg Sun:  Jets wrestling with ‘slowness’ disease.  No question this is a team that needs to play with speed and it was a telling comment by the Jets coach during his availability yesterday.

Winnipeg Free Press:  Roslovic, Greenway share unbreakable bond.  (Paywall).  Hockey is a close-knit community and it isn’t hard to find players with these types of connections.

Winnipeg Free Press:  Squeezing stick tighter won’t alleviate Ehler’s goal drought.  (Paywall).  The dynamic Dane still is playing at a high level even without putting the puck in the back of the net. 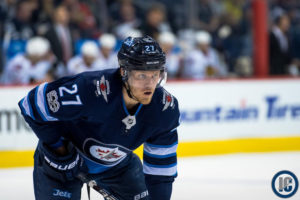 Winnipeg Free Press:  Battle-tested coach needs to keep Jets on right track.  (Paywall).  With a younger and relatively inexperienced playoff team it will be incumbent on the Jets bench boss to ensure that there is no panic in his team.

Winnipeg Free Press:  Status of Jets blue-liner Tyler Myers remains a mystery.  (Paywall).  While the Jets bench boss is keeping it a state secret reports surfaced later in the day on Monday that Myers was making his way back to Winnipeg.

Sportsnet:  Hellebuyck preparing to bounce back in his own way.  As illustrated below it is going to be a tough game for the Jets with a banged up backend but as illustrated above the Jets netminder has proven he can handle bouncing back after a tough contest.

Sportnset:  Tyler Myers’ ‘freak accident’ will test Jets’ defensive depth.   With a team already using their seventh and eighth defencemen in the lineup going to number nine is certainly going to put a strain on the backend and really increase the importance of Byfuglien, Morrissey and Trouba.

Minneapolis Star Tribune:  Wild looks to keep ‘fire’ burning as it tries to even series with the Jets.  The Wild aren’t gonna be complacent after a single win in this series as they look to keep the good times rolling at home.

Minneapolis Star Tribune:  Foligno caught in mini-controversy after injury-causing collision.  Plenty of Jets fans are none too pleased with the forward after his fall took out Jets defenceman Tyler Myers.

CBC:  A Texas retiree and a Minneapolis bartender, both Jets fans, find out they are mother and son.  Gotta say, I always love these types of articles.

TSN:  Hurting Myers ‘doubtful’ for Game 4 in Minnesota.  Tyler Myers hasn’t missed a game this season but his status for Game 4 is up in the air following a collision with Marcus Foligno on Sunday. Sara Orlesky, Darren Dreger and Pierre LeBrun discuss the nature of the injury and how the Jets may fill his void if he were to sit out.

Sportsnet:  Could Minnesota’s energy, Myers injury shift Jets-Wild series?  HC at Noon discussion on Minnesota’s Game 3 steamrolling of the Winnipeg Jets, and with Zach Parise looking as healthy as ever, and Tyler Myers going down, anyway this series shifts towards Wild?

TSN 1290 Winnipeg: Jets will bring a better effort in game 4.  TSN 1290 Winnipeg Jets play-by-play voice Dennis Beyak joined Andrew Paterson and Rick Ralph on the Afternoon Ride. They discuss the weather in Minnesota prior to game one, the injury to Tyler Myers, Marcus Foligno’s high hit on Jacob Trouba and why Hellebuyck will bounce back in Game 4.

TSN 1290 Winnipeg: Jets are confident they’ll bounce back.  TSN’s Pierre LeBrun joined Andrew Paterson and Rick Ralph on the Afternoon Ride. They discussed the Jets confidence to bounce back after a Game 3 loss to Minnesota, Minnesota’s performance in Game 3, the injury to Tyler Myers, secrecy among coaches during the playoffs, how Minnesota matched lines at home.

TSN 1290 Winnipeg: Jets were very much in game 3.  TSN 1290 analyst Trevor Kidd joined host Kevin Olszewski to break down the Winnipeg Jets loss to the Minnesota Wild in Game 3 of the Stanley Cup playoffs.

TSN 1290 Winnipeg: Foligno hit on Myers not suspension worthy.  TSN’s Bob McKenzie joined the Big Show for some NHL playoff talk including the Leafs collapse in Boston, the Golden Knight’s surprising run as well as the Jets first three games against the Wild including the Marcus Foligno hit on Tyler Myers.