An update on the status of Ondrej Pavelec. 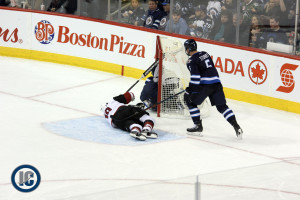 Update:  Coach Maurice announces that Pavelec has a signifciant knee sprain.  He’s not playing in December.  Hoping for January/February return.

The Jets sent out a release indicating that goalie Ondrej Pavelec will be placed on injured reserve after he sustained a lower-body injury in a collision with Coyotes captain Shane Doan Saturday night in the 2nd period.  The Jets have called up Connor Hellebuyck from the Manitoba Moose to backup Michael Hutchinson.

When we hear more from Coach Maurice today we will update the post.