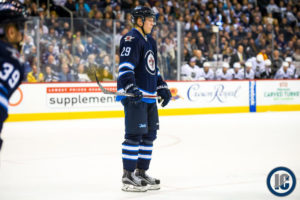 To the surprise of nobody the Jets rookie sensation was selected to be the Jets representative at the 2017 NHL All-Star game in Los Angeles at the end of this month.  While presently concussed he has amassed 21 goals and 16 assists for 37 points which is good enough for 14th in overall scoring and first among rookies.

Laine, 18, is in his rookie season in Winnipeg. He is second in the NHL in goals with 21, and is leading the NHL in points by a rookie with 37. He is tied for 13th in league scoring and has the team lead in points, tied with Mark Scheifele and Nikolaj Ehlers.

Laine, from Tampere, Finland was selected second overall by the Jets at the 2016 NHL Draft in Buffalo. Prior to his injury on Jan. 7, Laine had seven points (2G, 5A) in his last four games. Laine is one of the six forwards on the 11-player Central Division roster.