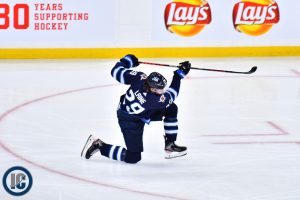 In case you’ve been sleeping under a rock, Patrik Laine is on fire to start the 2019-20 NHL regular season.  Laine currently leads the Jets in scoring with 11 points (three goals, eight assists) and today was recognized by the NHL as its Second Star of the week.

This is the fifth time in his career that Laine has been a Star of the Week.  To date: