Reminder—The Illegal Curve team contributed a number of articles for the 2011-2012 Winnipeg Jets Annual. You can pre-order the magazine, before it hits news-stands, here.

Winnipeg Free Press: Winnipeg to host NHL launch. The National Hockey League is getting the party started in Winnipeg this year and that is tremendous news. But I hope this Nickelback rumour is false.

Winnipeg Free Press: Mason to pay tribute to Iron Maiden on goalie mask. Now that is cool. Chris Mason, who we’ve had on The Illegal Curve Hockey Show three times, is going to have one of the baddest masks in the NHL. 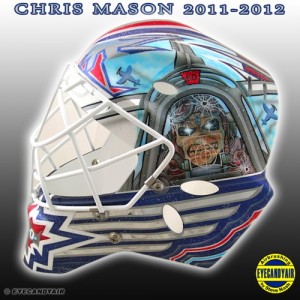 A Jets preview and from ‘Around the NHL’ a look at the 2011’12 rookies and the Kings make a signing after the jump.

NESN.com: Douglas Flynn previews the Winnipeg Jets for the upcoming 2011’12 NHL season.  A nice quick read courtesy of Boston Bruins beat writer Douglas Flynn. It’s nice to read a variety of previews from across the hockey globe. Although many hockey writers don’t think the Jets are a playoff team this year, the consensus is that the Jets are an up-and-coming contender.

NHL.com: Kings sign Ethan Moreau to a one-year deal. This is a nice depth signing for the Kings. Moreau will provide the Kings with some depth on the third line and will be a role model for the team’s younger players.