Reminder—The Illegal Curve team contributed a number of articles for the 2011-2012 Winnipeg Jets Annual. You can pre-order the magazine, before it hits news-stands, here 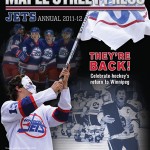 Winnipeg Free Press: Jets give tryout to former NHL goalie David Aebischer—Like the article states, he is a longshot to make the team, but the risk is non-existent so why not give him the shot?

Winnipeg Free Press: Up Close & Personal with Evander Kane—The Free Press profiles the Jets player with the most natural talent on the roster, now he just needs some seasoning. I’m surprised they didn’t mention his blood feud with his brother, The Undertaker, though.

Winnipeg Sun: Jets to have Strong Representation at Rypien Funeral—Given everything we know about True North, the class of the organization, and their bond to Mr. Rypien, it should be of no surprise that they will be in attendance at his funeral.

More Jets news and articles from Around the NHL after the jump.

CBC: Chris Drury calls is a career—His injuries finally caught up with him, and he had to call it a day. He still is the only player to win both the Hobey Baker Award and the Calder Trophy as Rookie of the Year

CBC: Ducks say Hiller is Healthy—Great news for the Anaheim Ducks as Hiller was playing like a top 5 goalie when he was felled with the Vertigo last season.

CBC: Greg Jamison looking into Coyotes Purchase—Could the savior of the Coyotes come in the form of a former San Jose Sharks executive? At the very least he will know how to build a successful NHL franchise in an un-traditional marketplace.