Note:  Tune into the Illegal Curve Hockey show on TSN 1290 Winnipeg on Saturday from 9 am to 11 am for the latest Winnipeg Jets and NHL talk.  Guests:  Mike Colligan (NHL analyst Forbes & Penguins correspondent at The Hockey Writers).

TSN 1290 Winnipeg:  Hustler and Lawless (audio).  Evander Kane of the Winnipeg Jets discusses his preprations for the upcoming season.

Winnipeg Jets official site:  On the Radar – J.C. Lipon (video).  The Jets are releasing videos they shot during development camp with their prospects.  In this video Mitch speaks with J.C. Lipon and get his thoughts on his camp, being in St. John’s, balancing rest/training during off season, what he learned during his first full season of professional hockey and is he more comfortable after his first professional year? 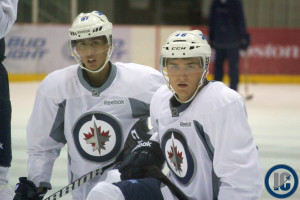