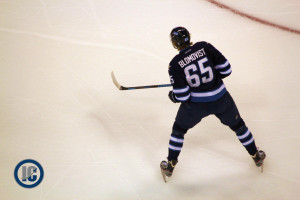 A little Friday reading of the upcoming roster for the 2014 rookie camp that is set to take place mid September.

The Winnipeg Jets Hockey Club today announced their roster from the 2014 Rookie Camp that will attend the 2014 Young Stars Classic in Penticton, B.C. from September 12-15.

The group playing in Penticton will be on the ice together for the first time at MTS Iceplex on September 11, 12:00 p.m.

Players suiting up for the Winnipeg Jets in this year’s Young Stars Classic include 2013 draft picks Josh Morrissey, Nic Petan and Eric Comrie, as well as 2014 first-round draft pick Nikolaj Ehlers. Other notable prospects named to the rookie camp roster are Scott Kosmachuk, who led the OHL’s Guelph Storm with 101 points last season, Adam Lowry, a former WHL player of the year making his third appearance in the Young Stars Classic, and Connor Hellebuyck, 2014 recipient of the Mike Richter Award as the top goaltender in college hockey.

Broadcast partner TSN 1290 will be carry all three Jets games from the Young Stars Classic, called by the team of new radio play-by-play man Paul Edmonds and colour commentator Shane Hnidy. You will also hear their play call as the games are streamed live on www.winnipegjets.com. Visit the Jets’ website for game recaps, interviews, and exclusive coverage from Jets TV during the Young Stars Classic.

This season marks the third time the Winnipeg Jets will take part in the Young Stars Classic, hosted by the Vancouver Canucks. The Jets have participated since their inaugural season in 2011-12 while the tournament was cancelled in 2012 due to the NHL’s work stoppage.