Note:  Tune into the Illegal Curve Hockey show on TSN 1290 Winnipeg on Saturday from 9 am until 11 talking about the Jets as well as the latest NHL news.

“Alexander Burmistrov to Prosports.ru: ‘I will almost certainly return to #NHL; next summer will be defining’ #Jets #KHL”

Winnipeg Free Press:  Home is where the Mark is.  Nice to see players getting to know the city outside of the hockey season and all that is has to offer. 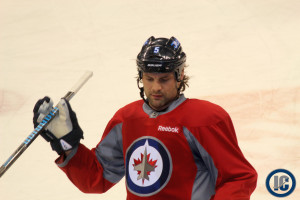 Winnipeg Sun:  Back to the booth.  If you missed the announcement yesterday, Paul Edmonds will be taking over as play-by-play voice of the Jets on TSN Radio 1290.

Illegal Curve:  Illegal Curve:  Jets players participate in #IceBucketChallenge.  The list is up to 24 players and prospects who have taken part in this challenge to raiser awareness for ALS and now includes Jets co-owner Mark Chipman whose challenge to NHL commissioner Gary Bettman was accepted and performed by the head of the NHL.