ESPN:  Top 100 NHL prospects (Requires membership).  Corey Pronman for ESPN Insider has constructed this list of prospects from all 30 NHL teams and Jets fans will be happy to see that they have a few high ranking prospects.

ESPN:  Top 10 goalie prospects  (Requires membership).  With the concern fans have about the future of goal tending in this city, the good news for folks in Winnipeg is that Pronman ranked Connor Hellebuyck on his list. 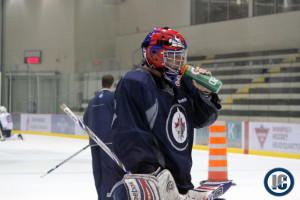 Illegal Curve:  Jets players participate in #IceBucketChallenge.  When I posted this link yesterday we had under ten Jets players and prospects on the list.  That list is up to 18 and now includes Bryan Little and Dustin Byfgulien (who challenged Jets co-owner Mark Chipman).