Winnipeg Free Press:  Frolik controls his future with one-year deal.  Gary writes about the deal that Frolik signed with the Jets, how he has a lot of control including quotes from his agent Allan Walsh. 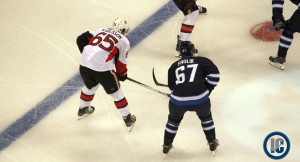 TSN 1290 Winnipeg: Rona Roundtable interview with Jets video coach Matt Prefontaine (audio).  Rick spoke with the newest member of the Winnipeg Jets coaching staff and they delved into his responsibilities.  You can follow the Jets newest coach on twitter @mattprefy.

Illegal Curve:  Kevin Cheveldayoff conference call on Frolik signing (audio).  The Jets GM spoke to Winnipeg media yesterday for about fifteen minutes and we’ve cut up the audio into the twelve questions he was asked ranging from why it was simply a one year deal to the team’s use of analytics.

Simcoe County:  Names added to Hockey Night in Barrie lineup.  Former Barrie Colt Mark Scheifele will be returning to participate in the fundraiser which takes place on August 14th.

Sportsnet:  Spezza, Scheifele to face-off vs tennis stars.  Missed this but the Jets centre will be trying his hand at the Sportsnet Ball Hockey Challenge this weekend at the Rogers Cup tennis tournament.