Note:  Today marks the first day of free agency.  Who will the Jets sign?  Be sure to stick to @illegalcurve for any and all breaking Winnipeg Jets news.

Winnipeg Free Press:  Jets readying for free-agent market.  Who are you looking forward to the Jets taking a run at adding for the roster next season?

Winnipeg Sun:  Jets re-sign Thorburn for three years.  He’s a  leader in the dressing room and played wherever he was asked to last season.  While some aren’t surprised that he was re-signed they were surprised to see him return for another three years.  What are your thoughts? 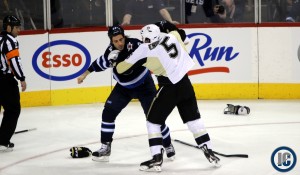 Winnipeg Sun:  Boychuk, Grabner, Kopecky could be among Winnipeg Jets trade targets.  Ken examines three players who may be on the Jets radar today.

Edmonton Journal:  Oilers are kicking the tires on Jets free agent Olli Jokinen, TSN’s Bob McKenzie says.  Will be curious to see if the Finn ends up moving West.

– James Wright did not receive a qualifying offer.

– Keaton Ellerby did not receive a qualifying offer.

– Matt Halischuk did not receive a qualifying offer.

– Adam Pardy gets one year contract.