I don’t think it’s very far down road, if at all, but my sense is WPG much more open to considering trade for any player, incl Evander Kane.

Ottawa Sun:  Flames make pitch for Spezza.  Notable for Jets fans that Garrioch says Winnipeg would be on the list of teams that Spezza doesn’t want to go to.  Having said that he doesn’t want to stay in Canada apparently so this should come as little surprise.

Winnipeg Free Press:  Jets elect to take Frolik to salary arbitration.  On Sunday we got some Jets news as the team announced that they have elected for salary arbitration.  Back in January our own Richard Pollock took a look at what a contract may look like for Frolik including a comparison to the Ducks Andrew Cogliano.

Winnipeg Sun:  Not much separates IceCaps, Stars in Calder Cup final.  After a long layoff for a convention the Stars and IceCaps will be back in action tonight at Mile One Centre.

Winnipeg Sun:  Redmond a rock for IceCaps.  Ken writes about the progress the blueliner continues to make with the IceCaps. 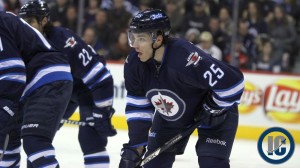