Winnipeg Free Press:  Wheeler working overtime.  Some players are shootout specialists and it appears that the tall winger is developing a knack for being in the right place at the right time in the extra frame.

Winnipeg Free Press:  Jets’ overtime win against Oilers shows power of youth.   The kids are alright.  Following the game I asked Mark Scheifele why he seems to score in the same game as Jacob Trouba and his response (with a wry grin) was “healthy competition”. 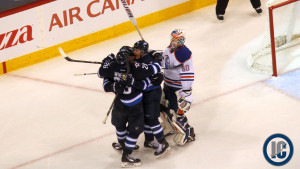 Winnipeg Free Press:  Young guns had help.  The play of wily vets helped to get the rookies the puck to be in a position for success.

Winnipeg Sun:  Big Buff has found his place.  While it is clear that Big Buff can be a force up front the question is will he be happy there?  Article also covers Jets fans chanting at Bryz, Wright still looking for that first goal, believing in themselves and around the glass.

Winnipeg Sun:  Scheifele ends goal drought. He had eight road goals this season and the MTS Centre crowd finally got a chance to cheer the 2011 1st round pick as he potted his first home regulation goal.

TSN:  Jets extend win streak with overtime victory.  From his perch high above the ice surface Dennis gives you his insight into the Jets win.

Edmonton Journal:  Oilers coach Dallas Eakins on Paul Maurice: ‘He’d never be an assistant’.  Missed this the other day but a good read on the relationship between the two coaches and provides some insight on the new Jets bench boss.

Postgame Podcast. Host Drew Mindell and analyst Richard Pollock break down the Jets play against the Oilers this afternoon.

Part 2:  How much Trade Value does Dustin Byfuglien have?  Potential Destinations for Dustin Byfuglien.  Interview with John Forslund, Voice of the Carolina Hurricanes.  Jets-Oilers Game Preview.  Your calls.