Following the open practice the guys assembled to speak with the media. 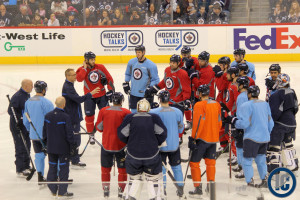 Chris Thorburn – Team over past week. Looking ahead to the road trip in California.  More confidence from last three games to play teams like Ducks and Kings.  Body language of his coach.  His thoughts on the baseball game at practice.


Jacob Trouba – How did he spend the night after the win?  How special is it to take his dad on the trip. Looking ahead to Anaheim and San Jose.

Evander Kane – Update on his hand. Any idea about how close he is? Will he share it? Being back participating in a full practice.  What has he noticed from the team under Coach Maurice?  Does this system suit his game?  On the coaching change.  Change in the mood in the room?  Talk about his injury and fighting in the game (more below).  His thoughts on the Cgy/Van game.  On the rookies Trouba and Scheifele.